Last Monday, I released QuantLib 1.7 (you can download it here if you still haven’t). As is becoming a tradition, here’s a quick look at the release.

It comes five months after 1.6, which is not bad. (In the meantime, we also had two small releases in the 1.6 series for compatibility with the latest Boost and Visual C++.) It contains 53 issues and pull requests that you can examine in detail on GitHub; just follow the previous link. The usual git incantation shows that the release consists of 217 commits by 14 people (once you filter out a few duplicates). 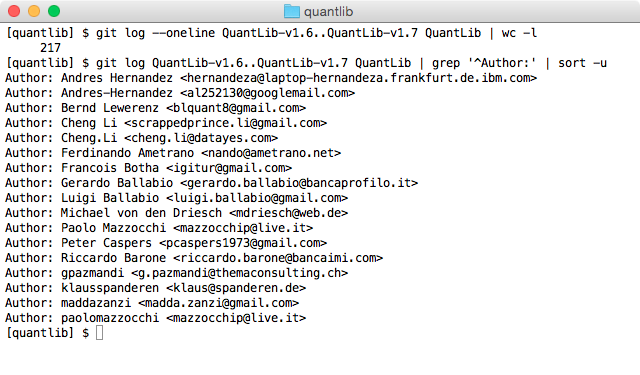 Other people were involved by contributing bug reports or patches; their names, as far as I could find them, are in the list of change for the release. I hope I didn’t miss anyone; if so, I apologize.

There are two new features I’d like to point out in particular. Both are disabled by default, as they cause a performance penalty. The first is the addition of a time to the Date class; this makes it possible to finally price intraday options. The second is a reimplementation of the Observer pattern that makes it safe to use from C# or Java, whose garbage collector had a habit of sometime destroying objects during notification and crashing the whole thing down. Both new features are mostly the work of Klaus Spanderen. You’re encouraged to try them out; the release notes explain how to enable them (look for them at the bottom of the file).

That’s all for this post. See you after Düsseldorf.