Unlike in Westeros, summer is coming. My posting schedule will be more relaxed, as usual, so don’t hold your breath waiting for the next posts (hint: subscribe instead, and you’ll be notified whenever I post).

A bit of news: the guys at Quants Hub are happy of the success of their new pricing structure, and they’re extending it to July 31st. This means that, for the whole next month, you can still get my video workshop for £99.

However, the bigger piece of news is that last Tuesday I’ve released QuantLib 1.6; you can download it at this link if you haven’t already. Thanks to all those who contributed. In this post, I’ll share some information on the release (like I did last time).

I’m happy to report that we managed to decrease the distance between releases. This one comes out four and a half months after QuantLib 1.5, which is much better than the one-year hiatus between the 1.4 and 1.5 releases. However, this doesn’t mean that the 1.6 release was a small one: it contains 65 issues and pull requests (follow the link to see their list and examine the changes brought by any one of them). A couple of quick git commands also shows a grand total of 382 commits by 16 contributors (git outputs 18 because it includes a couple of duplicates it doesn’t know about). 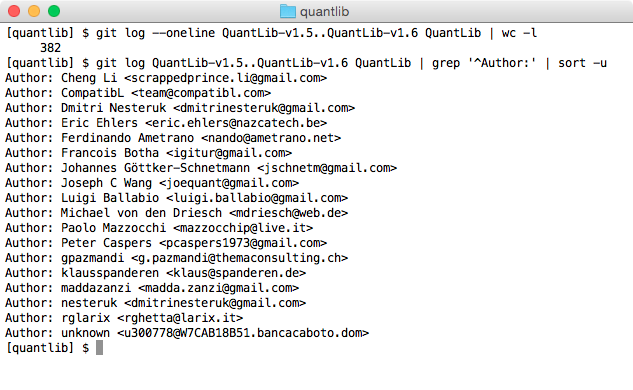 As usual, the list doesn’t include contributors that reported bugs, suggested changes, or even contributed patches but didn’t actually author the relevant commits. Their names are in the list of changes for the 1.6 release; apologies if I missed anyone.

As I write, there’s 27 open pull requests already in the queue for next release. Stay tuned.

Again, thanks to all those who contributed to the 1.6 release!