Just a quick post to share some information on the latest QuantLib release (version 1.5, released this past Tuesday; grab it at this link if you haven’t already) and to thank all the contributors that made it possible.

There were quite a few of them. A quick bit of git-fu shows that this release includes 566 commits by 16 authors (git shows 18, but two of them are different addresses for the same persons): 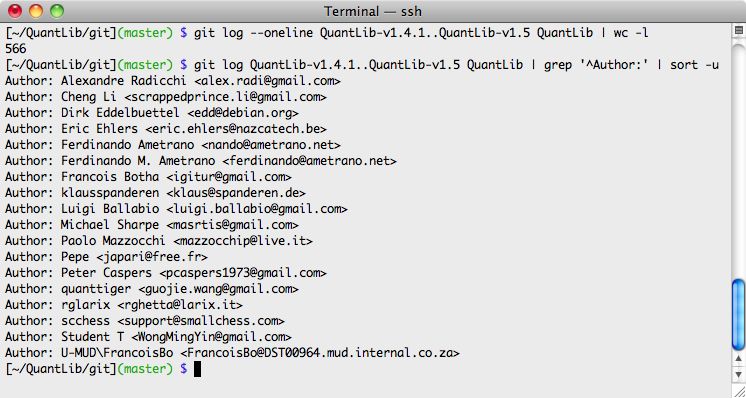 The actual contributors are more, though: a few people contributed patch files which were committed into the library by yours truly and thus don’t show here. I have no way to retrieve all their names quickly, but you can find them in the list of changes for the 1.5 release. While I was compiling it, I also checked that the pull requests that made the release were tagged correctly, so it’s also possible to search and display all 68 of them on GitHub: from that page you can drill down into any pull request that catches your interest and see what commits it contained, the code changes, and any discussion that went on before merging.

One final note: not including version 1.4.1, which only contained a bug fix, the previous version (QuantLib 1.4) was released in February 2014—one year ago. I think we should try and release more often. The content shouldn’t be a problem, seeing how we already have 27 open pull requests as I write this (as well as a few very interesting projects that I’ll describe in a future post).

I’ll stop here for now. Thanks again to all those who contributed to the 1.5 release!