In this post, the usual look at a few statistics for the latest QuantLib release: version 1.12, released February 1st and of course available from the QuantLib site.

This release comes four months after 1.11, so it took slightly less than the previous release. This can be attributed in part to the automated builds we have had in place for a while now (including some that test unusual configuration flags), which made the QA process before release a lot easier. Also, I was encouraged to be a bit less paranoid and not check every Visual C++ version from 2009 to 2017, so that took less time, too.

(And by “encouraged”, I mean “forced”. Story time: you might have heard that the Ubuntu upgrades for Spectre and Meltdown left some machines uncapable to boot. My desktop at work was one of those, and thus I lost the virtual machine I was using. I didn’t bother reinstalling everything on the new one.)

Anyway. The release contains 54 pull requests, which is an increase from last time (click here for the full list), and is the work of 26 contributors for 258 commits. It’s a few more people compared to last time, which makes me a happy maintainer. 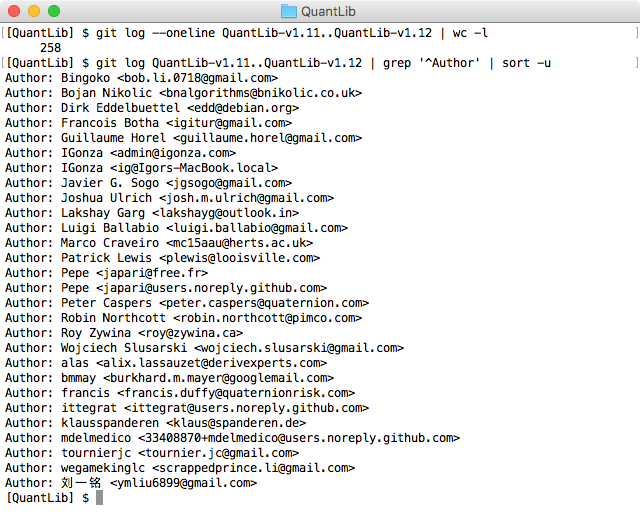 As usual, this doesn’t include all the people that reported bugs and suggested improvements; kudos to them, too, as well as to the people who contributed to QuantLib-SWIG; in particular, the 6 contributors who submitted 77 commits for a total of 13 pull requests.

Oh, and those contributors might include you in next release. If you want to have a go at some unresolved issue, they’re listed on GitHub for both QuantLib and QuantLib-SWIG. I’ve marked a few easy ones if you want to feel the water, as well as others that I can’t reproduce because I don’t have the relevant environment or tools. I look forward to hearing from you.

« QuantLib notebook: rho for the Black process The benefits of procrastination »