In this post, a quick look at some statistics for QuantLib 1.11, released on October 2nd. Also, a bit of news: the QuantLib User Meeting 2017 was announced recently. It will be in Düsseldorf on November 30th, and you can find a flyer with more details on the QuantLib site. Registration is free, but the places are limited.

Back to the QuantLib 1.11 release. It comes 4 and a half months after release 1.10, with the bug-fix release 1.10.1 in between; the trend of two or three releases per year seem to continue. It contains 47 between issues and pull requests, a decrease from the 59 in release 1.10 but still a nice figure. From the previous link, you can look at each of them in detail and see the specific diffs in the code (thanks, GitHub).

The usual bit of git-fu shows 288 commits by 20 people, once you remove duplicates. That’s a slight increase from the 256 and 19 in last release. Also, there seems to be a nice balance between new and recurring contributors. 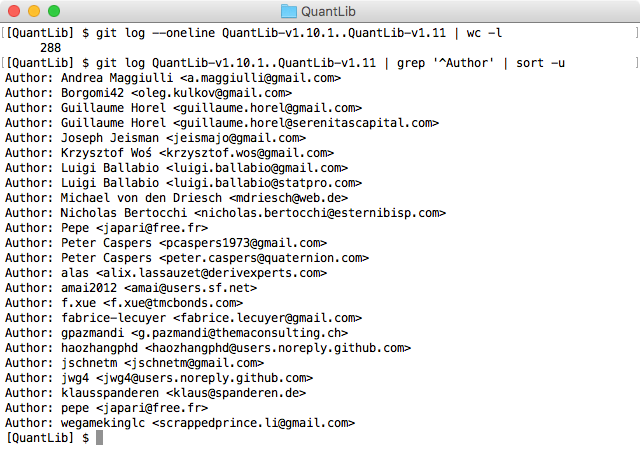 Thanks also to all the people (unfortunately more difficult to track) that have reported problems and suggested improvements through other channels.

QuantLib-SWIG 1.11 was released, too. It features 68 commits by 8 people for a total of 17 issues and pull requests.

Again, thanks to anyone that contributed. And, as I write this, there’s still a week left in October; pull requests opened to either repository until the end of the month will increase your count for this year’s Hacktoberfest. If you don’t have ideas, I’ve marked a few issues that you can tackle.

« A look back at the Implementing QuantLib series Screencast: my talk at the QuantLib user meeting 2017 »