It must be release season. Besides QuantLib 1.10, released a couple of days ago (this post being the usual look at a few statistics), this month saw a number of other releases and milestones.

On May 2nd, the good Eric Ehlers started the celebrations by releasing ObjectHandler, QuantLibAddin and QuantLibXL 1.9 (he’s changing the architecture of the plugin, but in the meantime he’s still doing releases based on the old one). On May 5th, Quaternion released version 1.8.2.0 of the Open Source Risk Engine. At the beginning of this week, and on a more personal note, the QuantLib Python Cookbook reached the 200-readers mark (and as I write this, Implementing QuantLib is just one reader shy of 400, so go get it if you haven’t). Lastly, on May 16th came the release of QuantLib 1.10, that you can download here.

It comes 6 months after release 1.9 (with two bug-fix releases in between). For some reason, I thought it took longer until I looked up the dates to write this post; but in any case, I don’t seem to be able to increase the frequency. Oh well. It contains quite a few issues and pull requests: 59, as opposed to the 38 in release 1.9. You can see them on GitHub. The usual bit of git-fu shows 256 commits by 19 people, once you remove the duplicate addresses. 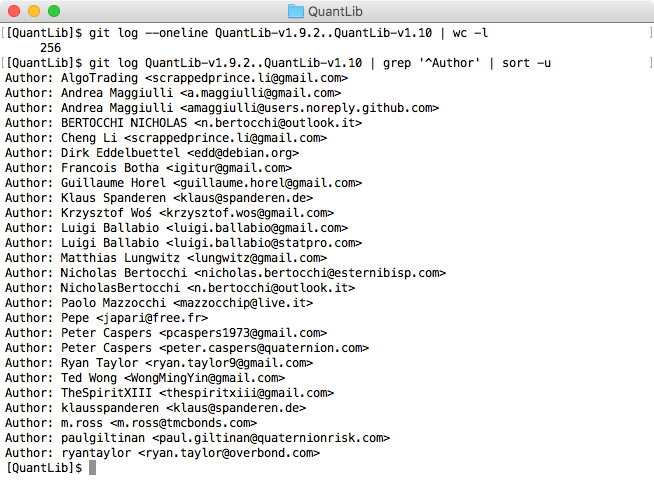 The above are not all the contributors: some people have contributed patches through other channels, and still others have reported problems and suggested improvements. I tried to acknowledge all of them in the list of change for the release; apologies if I missed anyone.

QuantLib-SWIG 1.10 was also released, featuring 43 commits by 11 people for a total of 13 issues and pull requests.

Again, thanks to anyone that contributed. Keep up the good work!