This last Thursday and Friday I was in Düsseldorf for the second QuantLib user meeting.

Man, was it good.

It was two days of great talks, with a good mixture of technical and financial content (and by the way, the slides are being collected and some are already available on the QuantLib page for the meeting). Thanks go to IKB, that sponsored the event and provided the venue, and especially to Michael von der Driesch and Peter Caspers, who organized the meeting and kept it running smoothly. I’m looking forward to next year. Really, we should have more of these events around Europe.

I wasn’t giving a talk this year, so I just relaxed and enjoyed the show. It started with the keynote of Ferdinando Ametrano (@Ferdinando1970) on open-source finance: QuantLib, OpenGamma and Bitcoin, with the latter being the success story and having the lion’s share in the presentation. (If you want to read Ferdinando’s papers on Bitcoin, they’re here and here). One thing stuck with me among those Ferdinando said about QuantLib: it isn’t nearly as used in academia as we would like. If you teach in a university, let me know if there’s anything I can do to help with this.

The second talk was by Roland Lichters, which told us of how speed is paramount in the CVA application he and his team at Quaternion develop. They fine-tuned QuantLib until they could price a swap on a given scenario in 30 microseconds (which I thought quite impressive) with a full analysis in about 30 seconds, but Bermudan swaptions were much slower; a full analysis would take some 50 minutes. Taking inspiration from the Longstaff-Schwartz method for American Monte Carlo, they now run an initial simulation to calculate swaption prices as a regression function. This initial time investment allows them to save time during the analysis, bringing its time back to the order of seconds.

In the last talk of the morning, Matthias Groncki presented the work he and Michael von der Driesch did at IKB on ABS. They wanted to make these instruments easier to simulate and price, and they knew that QuantLib could help since it had the basic pieces of the puzzle. Based on those, they wrote an implementation of the instrument in C++ and exposed it to Python. This allowed them to create an easier interface through IPython notebooks, providing graphs as well as numerical results as an aid to understanding.

After lunch, we restarted with Dirk Eddelbuettel (@eddelbuettel). Let me add a personal note here: Dirk has been helping with the project and packaging the Debian version of QuantLib almost since day one, and we never had the chance to meet in person before. I was delighted we could do it this time. Dirk gave us a description of his initial work on exporting QuantLib to R, and how this ultimately led to the development of Rcpp which is now used by more than 300 CRAN packages (or about 5% of the total). Other cool tools shown in his talk: Shiny and RMarkdown, which can use R packages (including RQuantLib) to provide interactive web-based reports. One thing I noticed is that most of the problems the RQuantLib package seems to have are shared with the C++ library, or rather caused by it: singletons, no time component in dates, no simple example for textbook calculations such as Black-Scholes. Eventually, we’ll have to do something about it.

Next, Sebastian Schlenkrich on the hot topic of this meeting: the modeling of the basic spread between Libor and funding curves (that is, either the OIS curve or possibly a cross-currency curve for deals collateralized in another currency). I won’t go into the details, which are in his (and André Miemiec’s) paper at SSRN. I’ll note, though, that his talk was the one with the most lively discussion at the end, with Sebastian, Daniel Duffy, Ferdinando and myself going over what could be the right design for including his results into QuantLib. No clear winner emerged yet, but the interest in the topic makes me guess that we’ll work on it.

The final talk of the day was from Peter Caspers, who described some of his several contributions to QuantLib during the past year. The list is impressive, covering no-arbitrage SABR; ZABR and SVI interpolations; TSR CMS coupon pricers; CMS-spread coupon pricers; Credit Risk+ model; Gaussian 1D models; simulated annealing optimizer; Runge-Kutta ODE solver; and dynamically created Mersenne-Twister RNGs. With a gentle metaphorical nudge in my ribs, Peter noticed that most of them are in the experimental folder. I agree; we need some kind of triage process to look at the contents of that folder and move them in the core library. I’ll explore some ideas after next release.

And with the end of this talk (also immortalized by Dirk on Twitter) we were off to dinner. 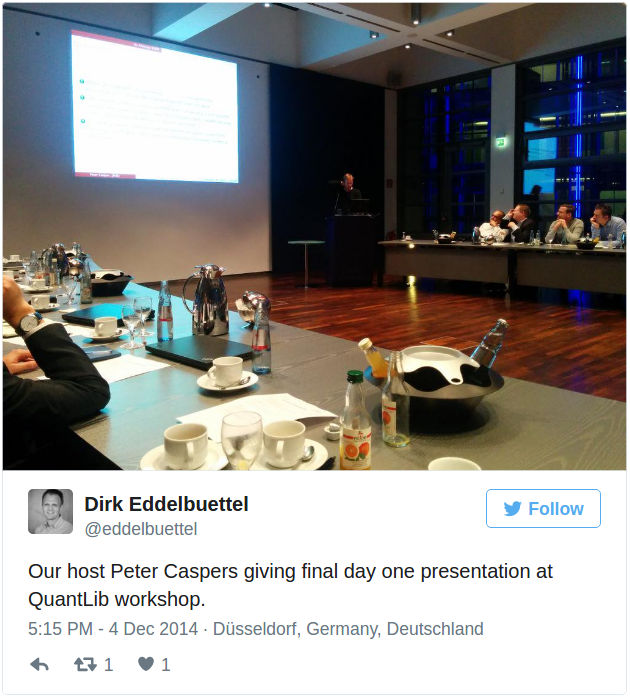 The second day started with a talk by Daniel Duffy, who described the latest iteration of his PDE and FDM framework. He made a number of interesting points. He told how, in a mathematical domain such as this, functional programming and generics are more suited to the task than object-oriented programming; and how C++11/14 made this style of programming easier with type inference (auto), lambda functions, and generic function objects (std::function). Using loosely coupled functions, instead of class interfaces, made it possible to separate clearly the different layers of the framework (PDEs, FDM, interface, and so on). Daniel’s code might get into QuantLib at some point (the main problem being that we’re still supporting older compilers that don’t implement C++11) but I’ve also been talking Daniel into releasing his code as a project on its own. We’ll see.

Next, Paolo Mazzocchi, who’s been working with Ferdinando on modeling basis spreads. In discount-based legacy systems, synthetic deposits are required for maturities shorter than the Libor tenor. Their approach was to parameterize the spread between Libor and funding curve in that range and fit the parameters to the existing market quotes. The details are in the slides (already available): expect a paper soon.

The last talk of Friday morning was by Bernd Lewerenz, on the subject of a new pricing engine he contributed for Asian options based on a model by Jan Večeř (and that, serendipitously, I merged in the main repository just days before the meeting). The engine makes it possible to efficiently price arithmetic-average Asian options, widely used in commodity markets. Also, Bernd told us he’s been driving the thing by means of the QuantLib Perl bindings, which makes this their first documented use.

Starting the afternoon talks: Eric Ehlers and his Reposit project. It is a rewrite of his gensrc generator for the QuantLib Excel bindings, it is implemented as a SWIG module, has a web site, and is a work in progress. Eric’s talk had the merit of sparking two developments: it attracted some interest in rekindling the QuantLib Calc addin, and made me think that this is probably the time to check SWIG’s support for shared_ptr and see if we can simplify our SWIG interfaces.

Next: a joint presentation by Klaus Spanderen and Johannes Göttker-Schnetmann on their quest for a calibrated local volatility. They are pretty well along it (in fact, so much that they changed he title of their talk to be a lot more optimistic than when they proposed it). Not only the details are in their presentation (and I wouldn’t do them justice, so go read the slides), but their code is on GitHub, too.

The final talk was from André Miemiec, talking of an open field of research: the arbitrage-free and consistent modeling of swaptions, CMS and CMS spreads. He’s been building on QuantLib to price CMS spread options. A simple extension of the existing code gave him a correct implementation on the first try; but there’s still work to be done on speed before it can be used in a production setting. It was nice to see the library help getting a working prototype quickly, though.

And with this, we got to the end. All the comments I heard were enthusiastic (including mine). As I said above: definitely something that should be replicated somewhere else.

Thanks again to the sponsor, the organizers, the speakers and all those who attended. I hope I’ll see you again next year.