A quick note on the book chapters available in PDF form. Last month, Creative Commons released version 4.0 of their licenses; so from now on, the available material is released under an Attribution-NonCommercial-NoDerivatives 4.0 International license. Your rights (and mine) remain the same under the new license; but, in the words of Creative Commons, it is more user-friendly and more internationally robust.

Onwards to the content of this post. As I mentioned in the past, sometimes questions about QuantLib are asked on the Quantitative Finance Stack Exchange. One such question was asked recently, and I thought I’d share the answer. It was an interesting question, and it’s a curious enough effect that one wouldn’t think of it in advance (I, for one, surely didn’t). Also, this might be the first in a series of QuantLib recipes. No, I’m not planning another book—I have my hands full enough. But I’m going to need something to write in this blog after the book is done, right?

The Strange Case of the Changing Implied Term Structure

The idea of Lisa Ann (hi, and thanks for the question!) was to forecast a future interest-rate curve based on today’s rates, and to use it to estimate some kind of forward price for a bond.

Lisa Ann instantiated the original curve and passed it to an ImpliedTermStructure instance with a reference date six months from today. The code was somewhat like the following:

A look at the discount factors of the two curves showed that they had been built correctly. As the last step in order to price the bond on the implied curve, Lisa Ann set the evaluation date to the future reference; and to her horror (yes, I’m dramatizing. Bear with me a little, will you?) this action changed the shape of the implied curve.

What had happened? The original curve was built so that it moved with the evaluation date, as described in the posts on term structures. Let’s work it out.

Let’s say that the original curve was like the fictional one shown in this figure; the \( x \)-axis is time and the \( y \)-axis shows instantaneous forward rates. From the figure, you can also see that I’m so stuck in my old ways that I’m still using Gnuplot.

The implied curve had the same rates (so I’m now showing it; it would coincide with the original curve) but started at \( t = 0.5 \). 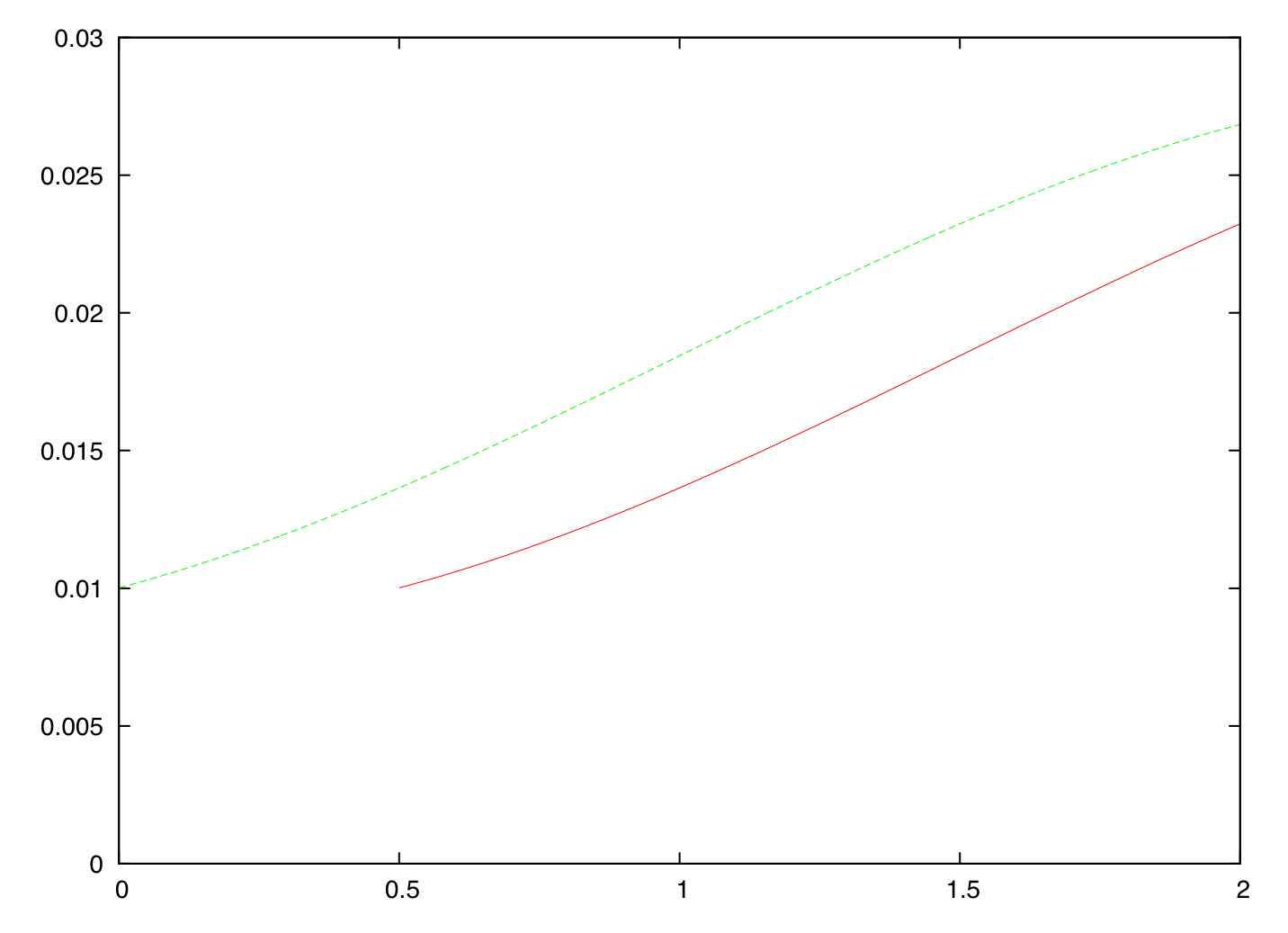 The implied curve was linked to the original one through a handle, and all it could do was to change its rates accordingly.

The solution, as you might have guessed, was to prevent the original curve from moving. In most cases, this can be done by selecting the appropriate constructor; that is, the one that takes an explicit reference date (again, all the details are in this post). This way, the original curve wouldn’t change when the evaluation date moved; and neither would the implied curve.